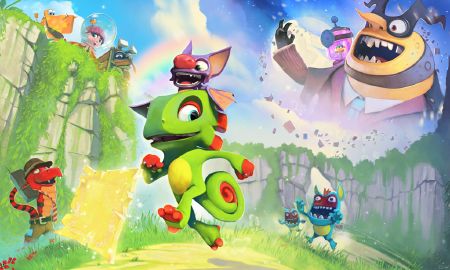 Yooka-Laylee is an all-new 3D platformer from the creative talent behind the Banjo-Kazooie and Donkey Kong Country games. We’ve come together to form Playtonic Games and create a spiritual successor to our most cherished work from the past!

Our new heroes, Yooka (the green bloke with no pants) and Laylee (the wisecracking lady-bat with the big nose) were conceptualised from the ground up for stellar platforming gameplay, created by the same character artist behind the rebooted Donkey Kong family and legendary N64 heroes Banjo and Kazooie.

Across more than five distinct Worlds Yooka and Laylee will tackle unique platforming challenges - such as rolling into a ball to navigate a pinball-inspired race course - in search of Pagies: the golden bounty used to unlock and expand new Areas of the game. As is traditional in the developers games, each world will be jammed to the gills with oddball Characters and hulking Bosses, many who communicate via a collage of burp and fart noises.

With an expected release date in late 2016, check out more news and speculation coming soon!